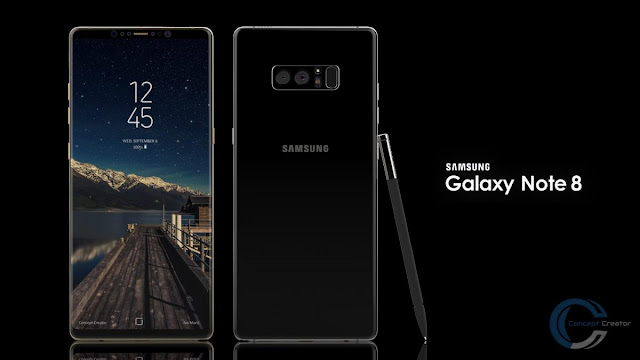 Samsung is clearly excited about its (highly expensive) Galaxy Note 8. Earlier this month the company ‘accidentally’ leaked it and now Samsung has gone a step further and officially promoted its massive size and new design…

This details came this week when the company sent out official press launch invites for its latest and, arguably, most important smartphone to date. But more importantly Samsung chose to give away two of the handset’s biggest talking points.

Multiple leaks from credible sources have shown the Galaxy Note 8 will be the largest premium smartphone Samsung has ever made sporting a whopping 6.3-inch, 19.5:9 aspect ratio display. Now Samsung’s official catchphrase for the event is: “Do Bigger Things”.

All New Design
While a 6.3-inch smartphone is obviously a big device, what will minimise its footprint is switching the range to the almost bezel-less Infinity Display used in the Galaxy S8 and Galaxy S8 Plus. In fact this allowed Samsung to enlarge the Galaxy S8 Plus to 6.2-inches and keep it just about usable in one hand (with one still-stupid exception).

Yes the Galaxy Note 8 is one big phone. But it is also a phone with slightly more squared bezels, a potential last minute design alternation which leaked in detail earlier this week.

Price Barrier
Of course the problem Samsung faces is convincing users to pay an asking price which is expected to start from $1,100. Some help will come from Apple, which is dramatically hiking the iPhone 8’s price as well. As such when you also throw in Google’s gorgeous Pixel 2 XL, 2017 is likely to finish with three of the most impressive smart phones ever made.