March 18, 2017
No fewer than 85 graduands emerged in the First Class category at the 28th convocation of Federal University of Technology, Akure (FUTA), on Saturday... The Guardian reports.

The Vice Chancellor of FUTA, Prof. Adebiyi Daramola, said 4,790 graduands of various academic programmes were graduated in the 2015/2016 academic session. 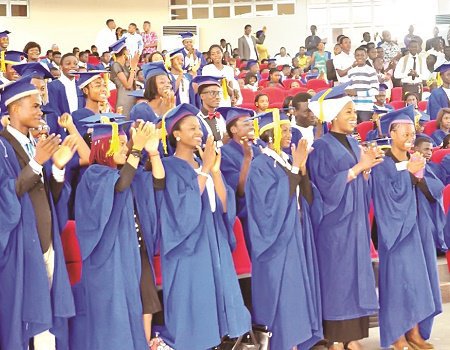 The vice chancellor, who broke the figures into various academic programmes, said 68 graduands were for diploma programme, 2,889 for Bachelors degree, 954 graduands and 767 graduands for post graduate programme and Masters of Technology respectively, according to him, 112 students had Ph.D degree.

The vice chancellor enjoined the graduands to be good ambassadors of the school, saying that they should impact positively their world.

He also used the occasion to appeal to the institution’s workers, who had been on strike, to return to work.

Earlier, the Chancellor of FUTA and Emir of Bauchi, Alhaji Rilwan Adamu, ,commended the graduands on their graduation .

Adamu described FUTA as the best university of technology in Nigeria, adding that it had impacted on its graduates by promoting self development and community service.

According to the emir, Nigeria is in serious need of people of goodwill with physical and intellectual agility to pull it out of its present economic doldrums.

Gov. Rotimi Akeredolu of Ondo State, who lauded the school for its achievements, urged the graduads to generate ideas that could make them entrepreneurs.

Giving a valedictory speech on behalf of other graduands, Mr Alli Semomhe, the overall best graduating student, said that hard work and prayer made him to achieve the feat.

Semomhe, a graduate of Electrical Electronics, said he participated in some social activities although he gave education and religion priority.

The 23-year-old graduand, who had 4.89 CGPA, said he faced challenges although he was focused on his priorities.