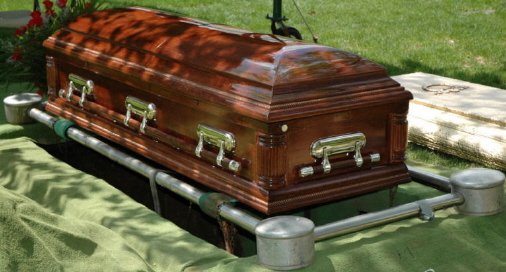 Charles Obong, 52, who worked as a senior personnel officer in the ministry of Public Service from 2006 to 2016, reportedly wanted to use the cash to redeem his soul before God, DailyMonitor reports.

Obong reportedly saved more than Shs200 million (about N17m) to bribe Almighty God on Judgement Day so He could forgive his earthly sins. He died on December 17, 2016, after a long illness and was buried on Christmas Eve.

He was buried in a metallic coffin estimated to have cost Shs20m. The Aromo Sub-county chairman, Mr David Elic, said his brother-in-law had left behind a Will, dictating that upon his death, his wife Mrs Margaret Obong should deposit huge sums of money in his coffin.

He planned to convey the money to God as an offertory so that the Almighty could forgive his sins and save him from hellfire.

He reportedly also instructed his brother Justin Ngole and sister Hellen Aber to bear witness to ensure his wife follows his testament to the letter and secure the money in his coffin.