Two JSS-3 students, 2 others arrested for armed robbery and cultism in Edo State. 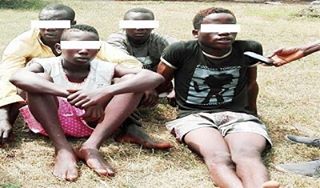 Two teenagers, who were arrested for alleged armed robbery and secret cult activities by operatives of the Edo State Police Command, were paraded in Benin, Tuesday.

The teenagers, Osayame Osamede and Junior Godbless (both 15 years), were arrested alongside two others for alleged robbery while armed with guns.

Osamede, a JSS 3 student of Army Day Secondary School, in Benin, and his elder brother who is now at large, procured the locally cut-to-size gun with which they robbed their victims during the yuletide period.