Driver stole his ex-employer's properties, including his dog, to buy Xmas needs of his siblings. 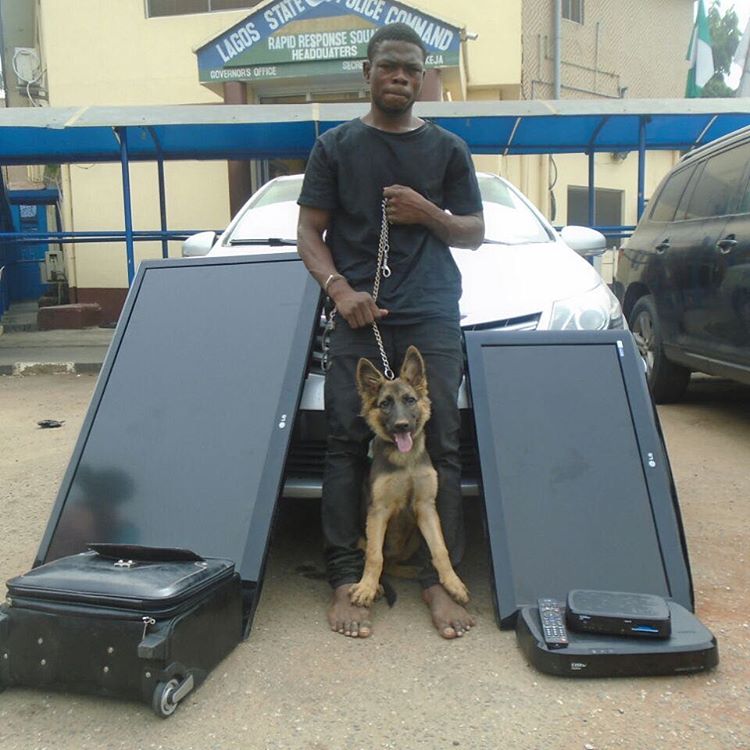 24-year-old Abass Ope accused of stealing his former boss’s car, TVs and a pet dog, has told police investigators that the Christmas needs of his siblings pushed him into the stealing.

The indigene of Ogun State, was arrested at the Ojuelegba area, on Boxing Day, while trying to sell off his boss’s Toyota Avensis 2013, for N2m. Arrested along with him were three of his friends: Balogun Oluwaseun (23); Sanni Azeez (23) and Stephen Ewiele (22).

Ope had during Christmas period raided his former boss’s Magodo home while the latter and his family were holidaying in Delta State, with an accomplice, to move a 100 inch LCD TV, a 42 inch LCD TV, a dog, a suitcase, two DSTV decoders, and a Toyota Avensis.

On hearing about his missing properties, the owner of the house called Mr. Ope several times but the suspect denied knowledge of the incident, forcing his boss to cut short his holiday with his family, to report the incident at Magodo Police Station.

Speaking, Ope said he took the car because he had no money to take care of himself and his younger ones. Driver stole his ex-employer's properties, including his dog, to buy Xmas needs of his siblings.


“They had no clothes, no shoes and this is Yuletide season. They looked up to me to take care of these expenses.

It was about three months now that I left Mr. Ekinodo (his former boss). I had worked for him for four years before leaving him on August, 2016. I left because he had a little challenge and things were pretty tough for him."

Ope described his former employer as “very nice boss to work with,” adding that he enrolled him into university but he couldn’t continue his education after leaving him.

Ekinodo Ifoghale said he was in shock because he treated Ope as a son. He said:


“Apart from my wife, he was the closest person to me. This is a guy that did my shopping for me. Even, before I buy anything for myself, I bought for him first."