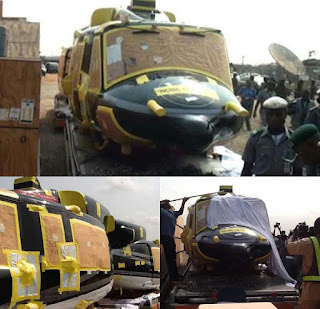 The Murtala Muhammed International Airport Command of the Nigerian Customs Service on Friday handed over two seized civil model Bell helicopters imported into the country by unknown persons to the Nigerian Air Force.


The NCS said the helicopters were handed over to NAF for failure by the yet -to - be-identified importers to produce end user certificate from the office of the National Security Adviser.

The NCS said this was in contravention of Section 36 ( 2) of the Customs and Excise Management Act and that the seizure was effected on November 7, 2016 in line with section 46 of CEMA.

Customs Area Controller, Frank Allanah, told journalists that the value of the two helicopters and other accessories was over N9. 7bn. He said the chopper would be useful to the Nigerian Air Force in the fight against insurgency as the chopper were specially designed for such operations.