Fear Gripped Nigerians as MMM Freezes Mavros For a Month.

MMM Nigeria, the ponzi scheme where members invest and are paid back between two to four weeks with thirty percent profit, has been frozen. 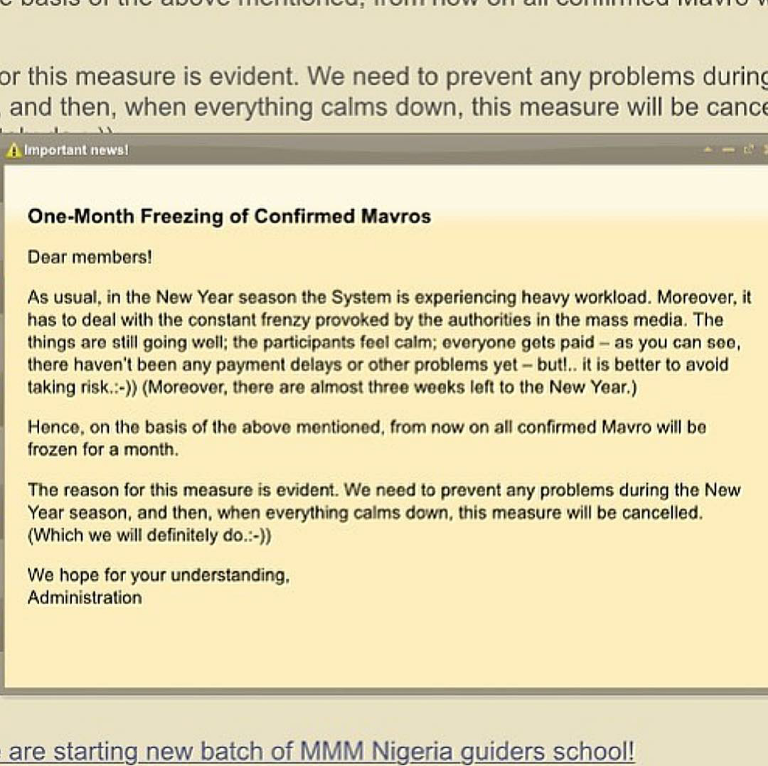 According to the management of the scheme, the accounts were frozen due to excessive withdrawal. A message from MMM administrator states that the accounts will be frozen for a month... statement reads:


“Dear Members! As usual in the New year season the system is experiencing heavy workload. Moreover, to deal with the constant frenzy provoked by authorities in the mass media. The thing is still going well; the participants feel calm. Hence on the basis of the above mentioned, from now on all confirmed Mavro will be frozen for a month.”

Broadcasts as also been circulated on whatsapp and other social media by a guider for members not to panic and Affirm it's just for a while to confirm Mavros... it reads:


"MMM Nigeria No. 1 Guider Chuddy On One Month Freezing of Confirmed Mavros.

This is from MMM Nigeria Guider 1 Chuddy
Hi Mavrodians, As we all must have seen in our PO of the news on Mavro frozen for a month.
This isn't the first of its kind. It happens when there are excess PANIC in the system
It was placed on Zimbabwe and after the duration it was lifted.
This idea is brought forward to Calm the members down on intending Threat the FG and Mass media has planned on the system.
It doesn't mean that there is no more money in the system because in my PO now as a guider, I have about 2million+ PH orders. And I know it would be like that in most Guiders PO too. So you see!!! Money to pay out the orders wouldn't be a problem.
But the Admins needed to apply measures to sustain the growth of the system. In order to fight issues that may arose as a result of Massive PH already this xmas.
Issues like:
So this is the best strategy to put FG to shame.
We all need not panic as our money is in safe hands. Check out your Mavros and you see your money is intact both for 30% bonuses and 20% accrued bonuses
You can keep PHing if you have the money, though you will definitely not be matched until Mavros are unfrozen. But that will really go a long way for you as your PH made this December will surely be giving you extra 20% after paying out next year.
No cause for Alarm
We live to expect a stronger MMM by January 14th, 2017
Guider Chuddy."

Meanwhile, dating back to how MMM South Africa crashed, it was realized that the same method of freezing Mavros was what happened and was never restored till today in South Africa...


"This is how MMM crashed in South Africa by announcing a freeze in May, 2016 and still frozen now - Security expert, Aye Dee". 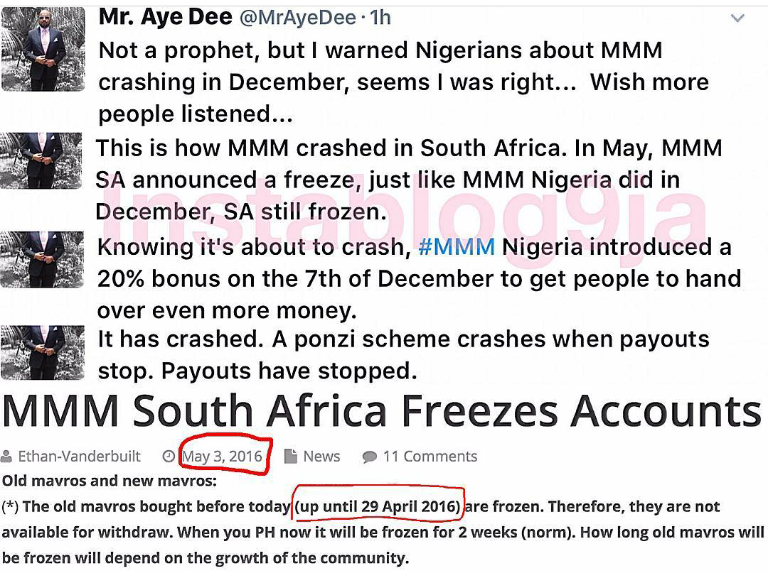 So Nigerians shine your eyes ooo, don't say I didn't warn you.