Court Orders Arrest Of King (Oluwo Of Iwo) For Allegedly Doing Yahoo Yahoo In His Palace. 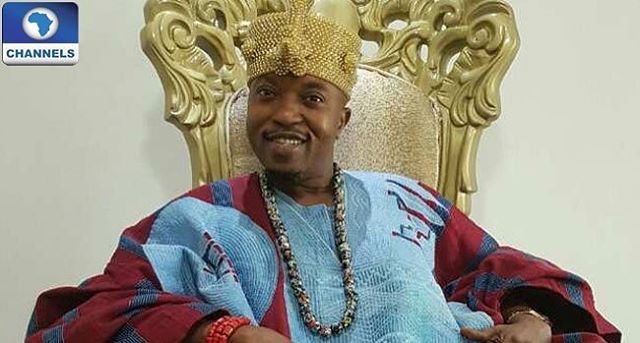 An Osun State Chief Magistrate Court has issued a warrant of arrest against a first class traditional ruler in the state, the Oluwo of Iwo, Oba Abdulrasheed Akanbi after he failed to show up in court to defend allegations against him by the Oluwo of Iwo-Oke, Oba Kadiri Adeoye.

Oba Adeoye had approached the Magistrate Court accusing the Oluwo of Iwo of concealing some facts about his past to the state government when he was installed as a first class monarch about a year ago.

Oluwo-Oke in a 33-paragraph affidavit said Oba Akanbi’s character did not befit a person of his status and calibre as he was used to carrying armed thugs, miscreants and hoodlums around to harass, intimidate, molest and attack persons whom he perceived as his enemies.

He further alleged that Oba Akanbi forged his name to obtain travelling documents to the United States where he was jailed in New York City and deported to Nigeria in year 2000.

He added that Oba Akanbi later travelled out with his real name to Canada in 2001 and became a Canadian citizen but was also arrested in Toronto and was in jail between 2006 and 2007.


“These facts were concealed for the state government which appointed and installed him as the Oluwo of Iwo,” the suit read.

He also accused him of presently making money through the internet fraud otherwise known as “Yahoo Yahoo” and was using his palace as a cover-up.

#Court Orders Arrest Of #Oluwo Of Iwo In #Osun State.
A photo posted by Channels Television (@channelstelevision) on Dec 20, 2016 at 9:33am PST