WWE: Eva Marie Wants To Be The Women's Version Of The Rock 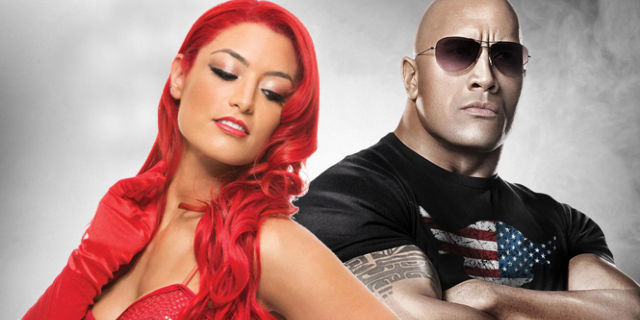 Can you smell what Eva Marie is cooking? The currently injured WWE superstar recently stated that she has her sights set on immulating the career of the WWE's greatest mainstream crossover star, The Rock.

Unlike other stars who conqured the wrestling ring before attempting a jump to television and movies, Eva Marie isn't waiting to make it to the top of WWE.


“After a few months [in WWE] I was like ‘OK, if I could emulate The Rock’s career that would be fantastic to make a crossover like how he’s done,’” Eva told International Business Times. “I really want to take the Eva Marie Brand and do both [wrestling and movies] for as long as I can.”

After filming “Inconceivable” alongside Nicolas Cage and Gina Gershon, Eva headed to Vancouver to become a bounty hunter in the filming of "Action #1."


“I’m hired to go and bring back a comic by any means necessary,” Eva told International Business Times. “It’s a different spin from the last character I played because the last character I played is a Plain Jane girl next door. She’s very much like a hippy chick, and then all of a sudden I’m rocking a wife beater, leather jacket, cargo pants and shotgun on this set.”

Considering Eva's currently serving a 30 day wellness policy suspension, it seems a bit of a stretch to think the all-red everywhere superstar could garner enough of a WWE audience to push her into the same stratsosphere as Hollywood's highest paid actor.  However, she plans to make her return in the not-too-distant future, hoping to become one of the top female wrestlers on WWE’s “SmackDown Live.”

Eva will be featured on the latest season of “Total Divas,” which aired its first Season 6 episode on Nov. 16. The new season will apparently feature Eva's quest to make it back to the WWE after her suspension.


“On ‘Total Divas’ you’ll see that emotion of not knowing,” Eva said. “Because I was able to compete in WrestleMania and then what?”

Snicker all you want about Eva Marie's quest to rival The Rock, but The Rock wasn't always the people's champ. The Rock's first run as a babyface went so poorly that the common chant that could be heard during a Rocky Maivia match was Die Rocky Die! It wasn't until he was able to capitalize on the heat that his star really took off.

Before her suspension, Eva Marie had chanelled the fans hatred of her into one of the most memorable entrances and characters of the past five years. While she may never captivate movie going audiences the same way the Brahma Bull has, you can't blame a girl for trying.

Disclaimer: Your opinions expressed in this comment box are of yours alone and not of lilwhiezz.