The Rock Reveals The Story Behind His Sweaty Pikachu Costume. 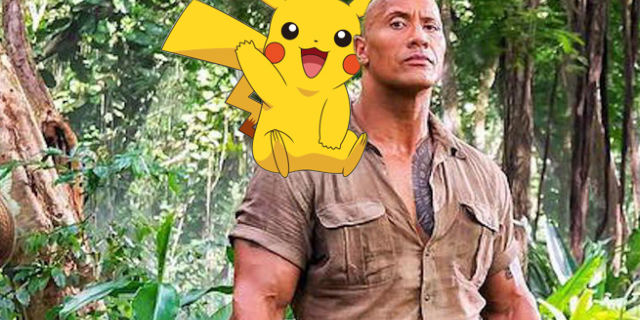 The Rock loves putting a smile on his little girl's face, which explains why he doesn't hesitate to put on an incredibly hot Pikachu costume on and dance around for her amusement.
The actor was recently asked by ET how the Pikachu costume came about, which he debuted on his Instagram on Halloween.


It was supposed to be a one and done, but unfortunately for Rock, he's had to put the costume back on numerous times.


"It's not only Halloween. It's about once a week. I am sweating my ass off in that thing. It's so hot."

It's evident the lengths he'll go through to bring joy to his kids, and they are also a part of his upcoming Disney project Moana.


"I have a 15-year-old daughter who represents Moana by the way, and I have an 11-month-old baby girl who represents baby Moana in many ways, so it's very special. There's a lot of, yeah, I'm going to need a shrink in about 6 months."

Three thousand years ago, the greatest sailors in the world voyaged across the vast Pacific, discovering the many islands of Oceania. But then, for a millennium, their voyages stopped – and no one knows why. From Walt Disney Animation Studios comes “Moana,” a sweeping, CG-animated feature film about an adventurous teenager who sails out on a daring mission to save her people. During her journey, Moana (voice of Auli’i Cravalho) meets the once-mighty demigod Maui (voice of Dwayne Johnson), who guides her in her quest to become a master wayfinder. Together, they sail across the open ocean on an action-packed voyage, encountering enormous monsters and impossible odds, and along the way, Moana fulfills the ancient quest of her ancestors and discovers the one thing she’s always sought: her own identity.

Pikachu is baby Jasmine's FAVORITE character. So, for Halloween me and @laurenhashianofficial decided the real life Pikachu was gonna come to the house for a visit. What Pikachu didn't know was that Jazzy would start crying when he stopped dancing and demanded he continue to shake his tail with a loud "EH!". So, Pikachu danced over.. and over.. and over.. and over... and over.. again. By the time I dropped my 197th JuJu, the heat of this costume was kickin' my ass.ߘ But, hey.. that's what daddy's do. #HappyHalloween #DaddyBlessedWithThatKnuckAndBuckStamina #NoLimitsWhenItComesToMakinEmHappy
A video posted by therock (@therock) on Oct 31, 2016 at 3:11pm PDT