Nick Jonas body might not be Despicable after all... He’s been working on his fitness and has the body to prove it. Nick Jonas proudly shows off his amazingly sculpted body on the cover of the December issue of Men’s Fitness. 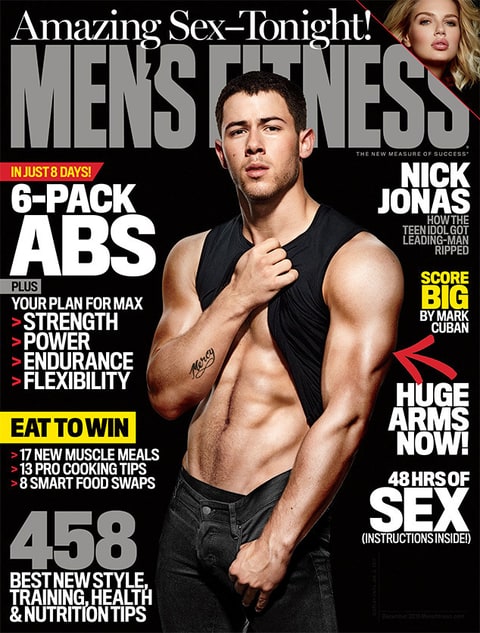 In the picture, Jonas, 24, lifts up his black muscle tank, flaunting his eye-catching six-pack, along with his bulging arms, as his left hand tugs his jeans down a bit. The “Jealous” singer also shows off a tattoo of the word mercy running along the side of his right forearm.

Jonas in a Men’s Fitness behind-the-scenes video of his cover shoot said:


“I think the way I work out is really placing trust in the people around me, I’ve got a couple good trainers that help me keep all of my workouts in order. I think the way I stay in shape when I can’t be in the gym all the time is just trying to make healthier choices when it comes to diet.”

Jonas plays an MMA fighter in Audience Network’s Kingdom, and the role is helping to keep him in shape, he said:


“Playing an MMA fighter is pretty challenging, you must have the physical element. I’ve learned a lot about fighting and feel like I just try to be a sponge because there’s so much more to learn.”

Jonas is currently filming the 2017 film Jumanji opposite Dwayne “The Rock” Johnson, and has been on-location in Hawaii. He recently returned home in November 2016 to see his newborn niece, Valentina, daughter of older brother Kevin and his wife, Danielle.

Kingdom was renewed for a third season in July 2016. Jumanji is expected to hit theaters December 22, 2017.