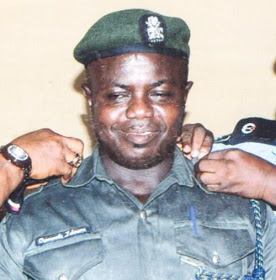 According to Linda Ikeji, The Chief Security Officer of Ondo State Governor, Olusegun Mimiko, Idowu Oyewole was shot dead by three gunmen at his home at Owo/Akure Express road yesterday October 20th. According to reports, Oyewole had retired home after the days work and was having dinner with his Family when the gunmen believed to be armed robbers attacked the home of his neighbor.

In an attempt to protect his neighbor and overpower the robbers, he took his service pistol and went to his neighbour's house where he then got shot. One of his sons identified as Dare who gave an account of what happened to the Nation said:

“Daddy was eating around 7.30 pm on Wednesday when our neighbour’s son called that there are robbers in their house. He took his service pistol and followed the boy to their apartment to dislodge the bandits. When they heard my dad’s footsteps, they started shooting and my father was injured.”

After he was shot, Oyewole ran from his home to a place where he could hide. He did not return home that night. His body was found on the road the next morning. He died from complications from gunshot injury.

Disclaimer: Your opinions expressed in this comment box are of yours alone and not of lilwhiezz.