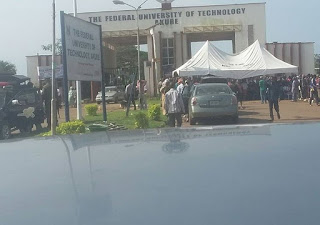 Despite the several happenings in FUTA today, futarians don't want a change in their academic calender. The university is to resume her 2016/2017 academic session by the 2nd week in November at norms, still nothing is said about it but futarians fear their might be a change due to the recent happenings... I can guarantee you futa students are saying a big NO!!! To that.

"FUTASUG DIVIDES ON PRESS CONFERENCE SUBMISSION TO STAND WITH THE VICE-CHANCELLOR"
The foremost University of Technology in Nigeria, FUTA continues to be engulfed in the series of event which enfolded on the sixth day of October, 2016 when the vice chancellor, Prof. Adebiyi Gregory Daramola was invited by the EFCC for questioning over alleged misappropriation of funds amongst others. Subsequently, the FUTA chapter of SSANU, NASU and NAAT began a protest to charge for a four-agenda points campaign. The points were noted in a press release by the unifying body of the staff unions, JAC. The points included immediate removal of the VC for charges levelled against him by the EFCC, dissolution of the governing council, probe of FUTA account and call for a visitation panel. The protest which began on the sixth day continued yesterday as Staff Union members in their intimidating numbers flooded the main gate of the University. However, men of the police were readily available at the school's entrance to bar the staff unions from gaining entrance. The protest which lasted till yesterday afternoon saw the Union members chanting and singing against the Vice-Chancellor. On speaking to one of the top officials who does not want his name disclosed, we heard that the Vice-Chancellor has refused to be moved by the on-going protest despite that several pleas have been made to the Vice-Chancellor to settle the Staff Unions.

The Student Union informed the Pressmen of their stand with the actions and decisions of the Vice-Chancellor and so dismissing the petition made by the EFCC citing the petition as baseless. The student Union also said that after her thorough investigation, it's evident that the petition was only to tarnish the name and reputation of the VC .
The student Union went further as touching the claims of the staff on "productivity allowances" that such was never approved by the governing Council and hence, the joint body, JAC consisting of FUTA SSANU, NASU and NAAT only rioted on a baseless issue.

The SUG claimed that the IGR scheme which the staff Union rioted about is said to have been used for infrastructural developments in the school which is believe to aid learning for all. The SUG also stated that the standard academic institution which the VC is committed to will be at detriment if the productivity allowances were given as a take-home package.
The SUG then reiterated firmly that the VC is a dedicated, focused and hardworking man that has done tremendous works in FUTA. The SUG also highlighted a few of his achievements; the construction of a 200-room female and male undergraduates hostel each, constant water and light, and also the relative stability of the school's academic calendar. They also stated that it was surprising that the JAC has decided to disrupt all of these for their selfish payments. These and more were the outcome and reasons stated as to why the VC has the backing of the SUG.

However, in another recent development, it has reached us that a faction of the SUG leadership and students are unhappy with the press conference. Claims that the press conference should have been lately held and that the protesters should have been given a fair-hearing was also stated. This then sends a looming signal as some of them called that students and the public disregard the press release statement earlier signed by FUTA SUG and await an official one.

While speaking to a top official of the University last night, he claimed that the press release from the SUG was misguided and proved their non-clairvoyance on the protest action.