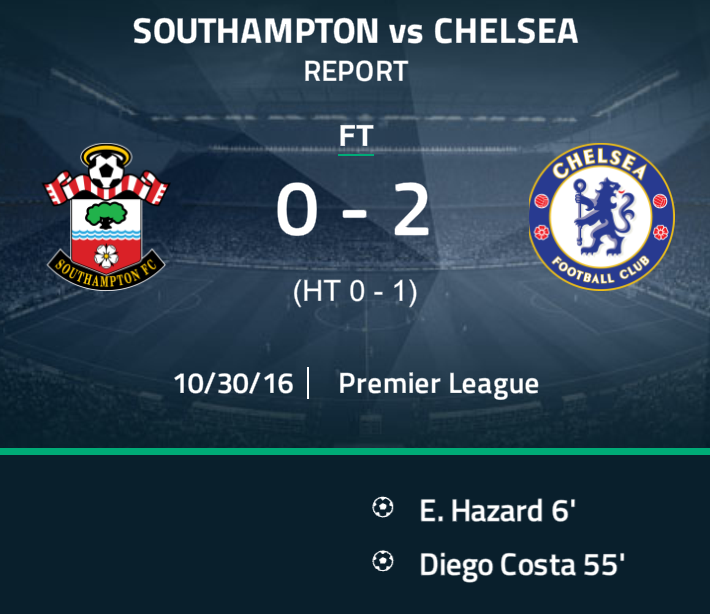 Antonio Conte kept faith in the players that destroyed Manchester United 4-0 on Monday, and they enjoyed similar control to rack up another win
Chelsea moved back to within a point of Premier League leaders Manchester City courtesy of a comfortable 2-0 win against Southampton at St Mary's Stadium on Sunday.

Eden Hazard and Diego Costa scored the goals to give the visitors a fourth top-flight victory in a row and put Wednesday's EFL Cup exit at the hands of rivals West Ham behind them.

Antonio Conte named the same starting line-up that dispatched Manchester United 4-0 last week and they again enjoyed a strong start as Hazard shot between the legs of Fraser Forster in just the sixth minute.

Claude Puel's Saints, who had not lost any of their previous five league matches, enjoyed plenty of possession without mustering a serious threat to Chelsea's disciplined defence.

Costa struck a brilliant second 10 minutes after half-time to double Chelsea's lead and the visitors never looked like surrendering their advantage on a ground where they have lost just once in nine league visits.

The win puts Chelsea above Tottenham and into fourth place on 22 points, one behind City, Arsenal and Liverpool, as Southampton missed out on the chance to climb into seventh.

Southampton were undone early on as Hazard punished mistakes from Steven Davis and goalkeeper Forster.

The Belgium international ran beyond the Northern Ireland midfielder into the area and, after cutting back onto his left foot at the near post following Victor Moses' pass, he nutmegged Forster for his fifth league goal of the season – one more than he managed in 31 games last term.

Austin wasted a chance for an equaliser when he headed Davis' free-kick well wide, but despite enjoying close to 70 per cent of the possession in the opening 30 minutes, Saints were kept comfortably at bay by the Blues. 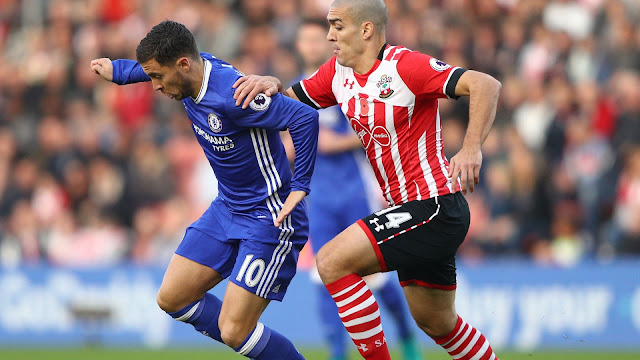 Indeed, Chelsea closed out the first half looking the more likely to find the second goal, with Hazard forcing Forster into a low stop before Costa was denied one-on-one by the leg of the England international.

But Costa was not to be denied 10 minutes after the break as he doubled Chelsea's lead in some style.

Having been allowed space on the edge of the area by Cuco Martina, whose backward shuffle did little to force him away from goal, the Spaniard curled a brilliant strike into Forster's top-left corner for his eighth league strike of the campaign.

Chelsea were denied a third by some last-ditch defending after Forster had spilled Moses' shot and Davis at last threatened Thibaut Courtois' goal when his header glanced off the top of the crossbar.

The closing stages saw Moses' strike beaten away by Forster and Charlie Austin denied by the offside flag after he finally found space in the Chelsea area before lifting the ball beyond Courtois.

Yet the visitors held on to a fourth league clean sheet in a row with relative comfort, as they gave their visiting faithful further belief that a title challenge is firmly in their sights. 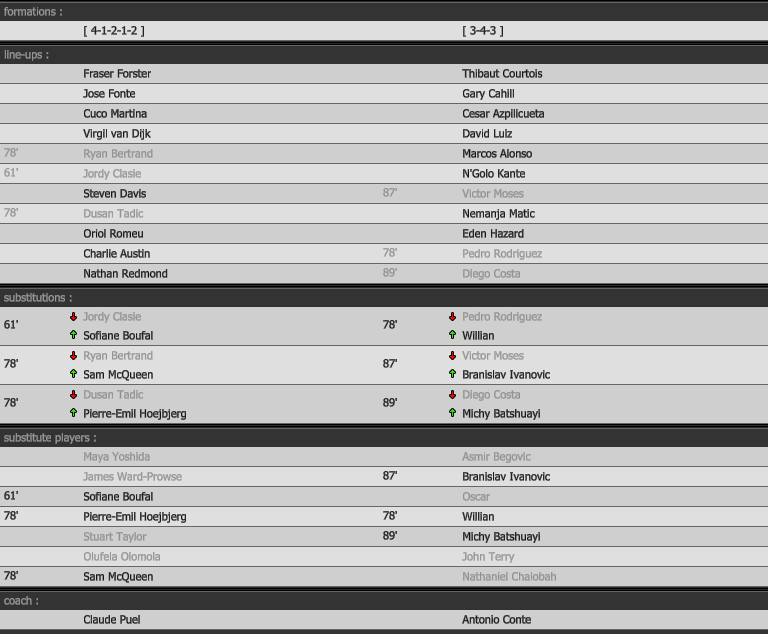