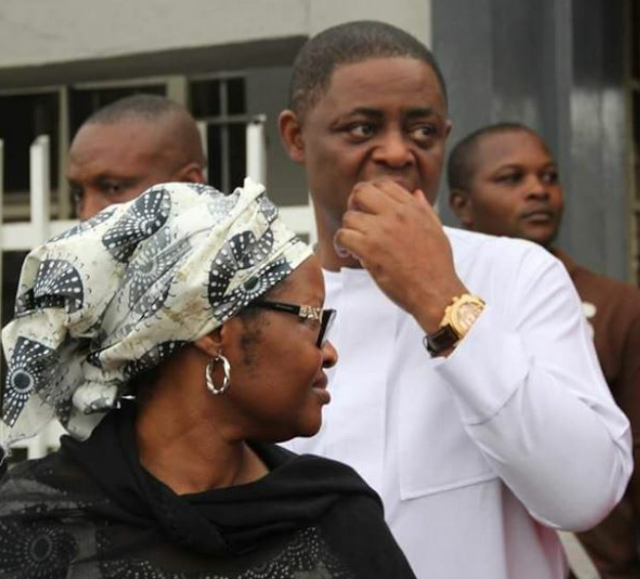 The Economic and Financial Crimes Commission (EFCC) on Friday re-arrested Chief Femi Fani-Kayode, after he stepped out of a courtroom at Federal High Court sitting in Lagos, where he is standing trial.

Chief Fani-Kayode, who was Director of Media and Publicity, campaign committee of ex-President Goodluck Jonathan, was charged alongside a former Minister of Finance, Nenandi Usman, Danjuma Yusuf and a company, Joint Trust Dimension Nig. Ltd., on a 17 count charge of unlawful retention, unlawful use and unlawful payment of money in the tune of about N4.9 billion, aa charge brought against them by the EFCC. Each of them pleaded not guilty to the charge and were granted bail.

On Friday, after the Prosecutor, Mr. Rotimi Oyedepo, opened the case and had wrapped up the witness’ evidence for the day, the court adjourned the case to Nov. 14 and Nov. 15 for the continuation of trial and rose.

However, shortly after the accused left the courtroom, two officers of the EFCC dressed in white Kaftans, flanked his sides and requested that he followed them to the commission.

Immediately, the court’s gate was barricaded by a Toyota Hiace bus and Fani-Kayode was arrested and taken away by the EFCC.

Meanwhile, when the case was mentioned on Friday, Oyedepo had opened the case for the prosecution and called his first witness, a Media Consultant, Mr. Idowu Olusegun. Leading him in evidence, the witness, a media Consultant for Paste Posters Company Ltd., told the court that N30 million was paid in cash to him.

Olusegun said that the money was paid by the office of the Director of Media and Publicity, PDP Campaign Organisation.

According to him, he had reached an agreement with the organization whose office is situated at 14B, Samora Micheal Avenue, Asokoro FCT, for the sum of N24 million for media consultancy services.

Olusegun told the court that after the printing job for the posters and flyers was done, he was invited to the office of the organization and given N30 million in cash.

He told the court that he had demanded to know why payments were made in cash, and was informed by one Mr. Oke, that cash was the approved means of payment.

He said that Oke had been the person communicating with him throughout the pendency of his engagement to do the media jobs.

The witness also told the court that apart from the N30 million paid to him, there is also an outstanding payment of N24 million which was not paid to his company. After his testimony, and based on agreements of counsels, the court fixed Nov. 14 and 15 for the continuation of the trial.
Meanwhile, a mild drama unfolded in the court during the trial when the trial judge, Justice Sule Hassan, ordered the seizure of the mobile phone of Fani-Kayode.

The accused had held his phones and suddenly, the phone rang out loud and the judge asked: “Who is doing that?’’ He spontaneously ordered the court’s registrar to seize the phone.

Similarly, the trial judge also issued a warning to counsel representing the accused when he sighted him sipping bottle water during proceedings.

The judge warned the counsel to seek the permission of the court, whenever his client was pressed to drink water.

According to Hassan, the court is not a market-place; there must be order and sanity. In the charge, the accused were alleged to have committed the offenses between January and March 2015. In counts one to seven, they were alleged to have unlawfully retained over N3.8 billion which they reasonably ought to have known formed part of the proceeds of an unlawful act of stealing and corruption.

In counts eight to 14, the accused were alleged to have unlawfully used over N970 million which they reasonably ought to have known formed part of an unlawful act of corruption.

Meanwhile, in counts 15 to17, Fani-Kayode and Olubode Oke, who is said to be at large, were alleged to have made cash payments of about N30 million in excess of the amount allowed by law without going through a financial institution.

Besides, Fani-Kayode was alleged to have made payments to Paste Poster Co (PPC) of No 125, Lewis St., Lagos, in excess of amounts allowed by law.