October 14, 2016
Barcelona begin their defence of the Copa del Rey against Hercules next month, whilst Real Madrid face a trip north to Leon to take on Cultural y Deportiva Leonesa. 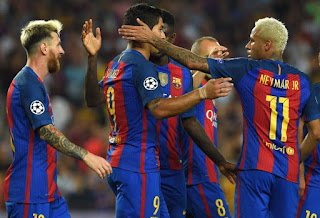 Hercules have suffered two relegations in the past six seasons to fall to Spanish football’s third tier, but caused a major shock in beating Pep Guardiola’s all-conquering Barca side 2-0 at the Camp Nou in their last season in the top flight in September 2010.

Madrid, meanwhile, are looking to restore their pride in the competition after being thrown out for fielding an ineligible player in their first game of last season’s competition at Cadiz.

Russian international Denis Cheryshev scored the opening goal of the game, but was suspended due to an accumulation of yellow cards when on loan at Villarreal the previous season.

The first leg of the ties will be played on November 30 with the return on December 21.