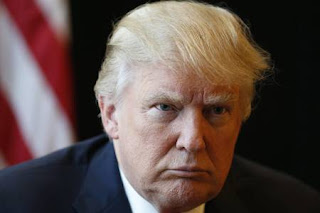 Trump had planned to hold his first event with his yet-to-be-named running mate Friday morning in New York. He announced the change of plans Thursday evening on Twitter.The stunning announcement raised questions about the status of Trump’s selection process. Indiana Gov. Mike Pence had emerged as a late favourite for the job, though Trump said he had not finalized the pick and advisers cautioned he could change his mind. 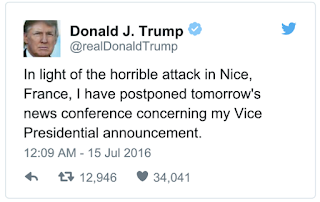 “I haven’t made my final, final decision,” Trump said on Fox News Channel. He said that while his running mate selection would “absolutely not” be changed by the France attack, he did not feel it was appropriate to hold a news conference in its aftermath.

Dozens of people were killed late Thursday in the French resort city of Nice when a truck drove onto a sidewalk and plowed through a crowd of Bastille Day revelers who’d gathered to watch fireworks. Trump told Fox News after the attack that if he’s elected president he would ask Congress for a declaration of war on the Islamic State group.

Democrat Hillary Clinton, also appearing on Fox, said the U.S. needs to “stand strongly” with France and strengthen alliances, including with NATO, to ferret out terrorism and prevent future attacks. Clinton said she would intensify efforts to put together a more effective coalition against terrorism.