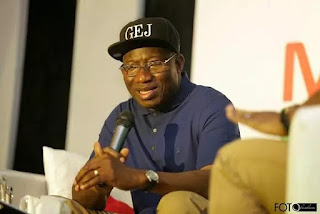 He said as the quest for Nigerians and other citizens worldwide to have equal rights deepens, there is need for Nigeria to appropriately revisit the law.
Jonathan said this at a forum in Bloomberg’s European headquarters in London.
According to him, “When it comes to equality, we must all have the same rights as Nigerian citizens.
“The nation may at the appropriate time revisit the law in the light of deepening debates for all Nigerians and other citizens of the world to be treated equally and without discrimination and with the clear knowledge that the issue of sexual orientation is still evolving.”
It would be recalled that in January 2014, Jonathan signed into law the Bill which outlaws same sex marriage, gay groups and public displays of affection by homosexuals.
The signed bill says the gays; lesbians in Nigeria will risk a 14-year jail term if they do not retrace their steps and renounce such marriage. Also, any person who operates or participates in gay clubs, societies and organisations directly or indirectly will earn a 10-year imprisonment. Those who administer witness, abet or aid the solemnization of a same sex marriage are going to bag a 10-year jail term.
The decision, however, triggered condemnation by religious leaders, human rights groups and Western governments.
Source: DailyPost