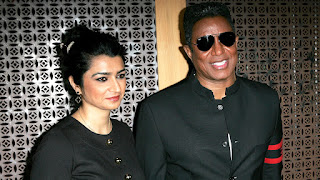 Jermaine Jackson's wife Halima Rashid filed for divorce on Tuesday, citing irreconcilable differences.
The two were married in August 2004, and while Rashid is filing for divorce nearly 12 years later, she cites in the papers that they've been separated since Nov. 28, 2015.
Rashid and Jackson do not have any children together, but she is requesting spousal support.
Jackson, 61, is, however, is the father of nine children from prior relationships. He was also previously married to Alejandra Genevieve Oaziaza from 1995 - 2003, and Hazel Gordy from 1973 - 1988.
Also this week, Jackson came out in defense of his late brother, Michael Jackson, over new child pornography collection allegations. "In death, Michael still suffers trial by media but his exoneration is enshrined in court transcripts 'journalists' are too lazy to read," he tweeted, adding, "Let Michael rest in peace. Leave. Him. Alone."
Saturday will mark seven years since Michael died at the age of 50 at his Holmby Hills home in Los Angeles, California.
Etonline.