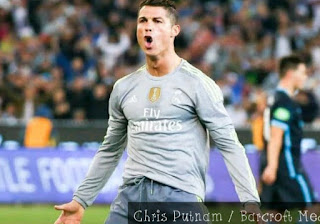 1. Cristiano has now scored against 31 different clubs in the Champions League.

4. It’s not just goals either. In terms of Champions League ‘goal involvements’ (goals+assists), he is miles ahead of everyone else. The top three since since 2012/13: Cristiano Ronaldo (65), Lionel Messi (40), Robert Lewandowski (37).

5. Cristiano is the only player to score 15 or more goals in two different Champions League seasons (this season and 2013/14, when he scored 17 – the record).

8. Cristiano’s personal goal tally this season (16) is double that of any other player. Robert Lewandowski is in second place, with eight. FYI, Lionel Messi is fifth on the list, with six.

9. His 11 minute hat-trick against Malmo in the group stages was the third fastest hat-trick in Champions League history. Only Mike Newell (nine minutes, for Blackburn vs Rosenborg in 1995) and Bafatembi Gomis (seven minutes, for Lyon vs Dinamo Zagreb in 2011) have bagged the matchball in quicker time.

10. During his career, Cristiano has now 15 goals in Champions League quarter-finals alone (and yes, that is more than anyone else).

11. Ronaldo and Messi were neck-and neck in career Champions League goals for ages, but Cristiano’s performance this season means he is now almost certain to be the first player to score 100 goals in the competition. He is now on 93, with Messi back on 83.