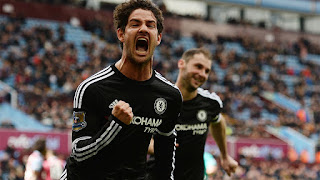 Interim manager Hiddink was without Diego Costa, Eden Hazard, Willian, Gary Cahill and John Terry, but they were not missed as his side romped to an emphatic win at an angry Villa Park.
Youngster Ruben Loftus-Cheek scored his first Premier League goal for the club, while a well-taken double from Pedro Rodriguez put the seal on their triumph in the second half.
To make matters worse, Villa had defender Alan Hutton sent off in the closing stages for a second bookable offence to end a miserable week in which the Midlands club parted company with manager Remi Garde.
The victory for Chelsea kept alive their faint hopes of Europa League qualification, after a disappointing month in which they lost ground in the league and also crashed out of both the Champions League and FA Cup.
When the game eventually stirred to life after a lacklustre opening 10 minutes, Chelsea went close to gaining an early advantage as Pedro curled narrowly wide.
In response, Rudy Gestede gave Chelsea goalkeeper Thibaut Courtois something to think about with an effort from distance.
Chelsea were denied the opener by an offside flag after Pedro neatly controlled a Cesc Fabregas pass before lobbing the advancing Brad Guzan.
The writing was on the wall for Villa though, and the visitors duly went in front with a well-worked move in the 26th minute.
After some neat footwork by John Mikel Obi, Fabegras picked out the overlapping Cesar Azpilicueta and his low cross was swept past Guzan by Loftus-Cheek via a crucial deflection off Joleon Lescott.
– Wretched luck –
As if to sum up Villa’s wretched luck, Chelsea then benefited from a moment of good fortune when Baba Rahman’s attempted clearance cannoned off Jordan Ayew, only to land in the grateful arms of Courtois.
Chelsea looked increasingly menacing and Loftus-Cheek was only fractionally off-target with a curling shot from just inside the box after catching Carlos Sanchez in possession.
A second goal seemed on the cards as Guzan came to Villa’s rescue with a last-gasp save to deny Rahman after he had been released by Fabregas.
Chelsea’s second goal arrived in first-half injury time when Aly Cissokho was penalised for hauling down Pato as the Brazilian — a replacement for the injured Loic Remy — tried to get his head to Fabregas’s cross.
The one-time Brazil star, a January loan signing from Corinthians, was not going to let the opportunity to make his mark at long last slip by and neatly tucked the spot-kick beyond the diving Guzan.
Villa were dealt another blow immediately after the restart and it was another Brazilian substitute, Oscar, who made an instant impact after being introduced in place of Kenedy.
Oscar burst down the left and played a neat one-two with Pato before providing a cut-back that enabled Pedro to score from close range.
Against a backdrop of Villa fans chanting “You’re not fit to wear the shirt!”, Chelsea took an even firmer grip on the game.
The home fans must have feared a repeat of the 8-0 drubbing their side suffered at Chelsea in 2012 when Guzan could only push out a shot from Pato, allowing Pedro to squeeze home his second goal from a tight angle.