April 06, 2016
The attention of the Chairman of the National Association of Nigerian Students' [NANS], Joint Campus Committee of Ondo Axis, Comrade Falegan Samson
has been drawn to various news circulating on online news media and dailies laced with lies and outright misinformations. 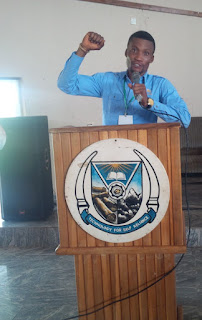 The posts were full of fabrication and inaccuracies. Ordinarily this would have been best ignored. I was however constrained to write to you on account of the severe implications of the allegations for the integrity of the Chairman, as a personality.

The enemies of progress said that I am not a legitimate Chairman of NANS JCC Ondo state and I won through fraudulent means and via hook and crook method. The information is a malicious innuendo, insinuations, false and figment of the writers' imaginations.

I wish to state it categorically and unequivocally that:

2- Comrade Falegan Samson was formerly the Vice Chairman of NANS JCC Ondo Axis and I have been nurturing the ambition for long period and this is not the first time that a Vice Chairman of the association will emerge as the Chairman, it occurred in Oyo state recently.

3- Comrade Falegan Samson is not being sponsored by the state government and can never wait for the crumbles that will fall from the Governments' political tables. I am for the students' interests and will not be an arm of any political party.

I wish to state that the report is nothing but bunkum, absolute falsehood and full of fabrications.