April 22, 2016
Louis van Gaal does not have any fresh injury concerns ahead of Manchester United’s Emirates FA Cup semi-final against Everton, with only three long-term absentees set to miss the trip to Wembley.
Luke Shaw has been training individually with a physio and the young left-back is making good progress but is not ready to return just yet. Adnan Januzaj also needs to build his fitness before featuring for the first-team, while Bastian Schweinsteiger is not expected to play again this season.
Chris Smalling hobbled away from a late collision during Wednesday night’s 2-0 win over Crystal Palace, but thankfully the defender declared himself fit during his post-match interview with MUTV .
While speaking to the club’s official channel on Thursday, van Gaal gave this update on the injury situation: “The squad is nearly fit. Only Shaw and Schweinsteiger are unable to play and maybe Januzaj because he didn't play yet in the second team. But we have a full squad of fit players.”
Wayne Rooney played in midfield against the Eagles and was substituted to a fine ovation from the supporters on 78 minutes, presumably with Saturday’s match against his boyhood club in mind.
When asked to comment on Rooney’s good form in the team, van Gaal was reluctant to single out his captain. “Of course but that counts for every player I think. Not only Wayne. The media and now you are talking about Wayne but we have a squad of 27 players and I am happy with everybody.”
Picking a starting XI while excluding others is always difficult and the manager knows he will have to disappoint part of his squad. "Every player wants to play in a semi-final," he said. "I have to select 18 players and I have now 24 players fit so I have to disappoint six players and that is not fine for a manager." 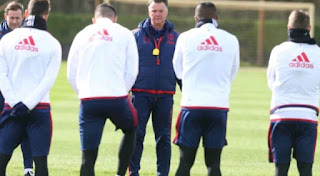