January 25, 2016
The Environmental Health Officers Association of Nigeria (EHOAN), Lagos State Chapter, on Monday said that it had destroyed no fewer than 4,400 rats at six major markets in the state under its de-rat market programme. 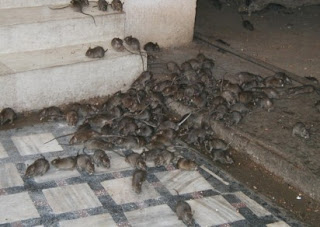 Its president, Mr Samuel Akingbehin, told the News Agency of Nigeria (NAN) that his association carried out the exercise at Onigongbo, Oshodi, Oke-Odo, Ikotun Idanwo, Ojuwoye and Mile 12 Markets.
He said that de-rating the markets was part of the association’s efforts to curb the spread of Lassa fever in the state.
NAN reports that this was part of efforts by the public and relevant agencies to de-rat markets that were the causes of the Lassa fever that had broken out in many states.“The exercise is strategic in our effort toward the prevention of communicable diseases,’’ he said.
The disease, since its outbreak, had killed at least 76 victims and over 200 cases across 17 out of the 36 states are quarantined and under observations.
Akingbehin appealed to traders from across the state to show an understanding toward the efforts of the association to rid the markets of rats and rodents.
He said that the plan was to de-rat markets in one local government area per day starting from 5p.m.
The association decided on this time to allow traders and buyers transact their legitimate businesses.
“We also decided to put the exercise in the evening due to the nocturnal nature of rodents and our members had recorded successes in the markets visited till date.
“It took us about three hours to cover the Oshodi market when our members went there for the exercise.
“Today, Monday, we will be visiting Suru-Alaba Market in Orile-Ifelodun LCDA by 5pm with about 400 EHOs to de-rat it.
“We are still calling on all other executive secretaries of the local government areas to assist us toward the elimination of rodents in our markets and our environments,’’ he said.