October 12, 2015
Lewis Hamilton stands on the verge of joining Sir Jackie Stewart as the only British driver to win the Formula 1 world championship three times after securing victory in the Russian Grand Prix on Sunday, but once again his podium antics have caught the headlines.
However, this time Hamilton has not been guilty of spraying a helpless podium girl in the face, but rather more comically the president of Russia, Vladimir Putin.
Hamilton was greeted by Putin in the drivers’ cool-down room, a place where they can compose themselves after the rigours of completing an F1 race before they face the public and the prying TV cameras out on the podium. 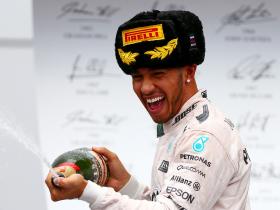 The occasion looked somewhat frosty, but Putin appearing to ignore the two-time world champion before realising he was on TV, and offered a congratulatory handshake before greeting second and third place finishers Sebastian Vettel and Sergio Perez.

But after presenting Hamilton with the race winners’ trophy, the 30-year-old shared a warm embrace with Putin – and promptly sprayed him with champagne.
As Putin made his way off the podium, Hamilton raced to soak the crowd and unknowingly caught the Russian president, with champagne seen to splash on his suit as he made a swift exit.
Hamilton was all smiles though, and he had good reason to be too. The 2008 and 2014 world champion leads Vettel in the Drivers’ Championship by a healthy 66 points, with teammate Nico Rosberg slipping to third after an early retirement in Sochi. 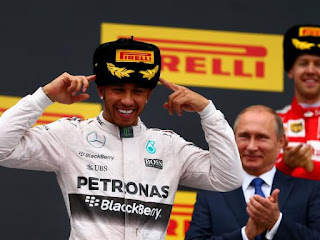 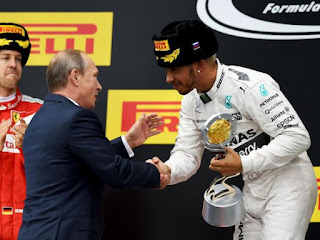 Vladimir Putin presents Lewis Hamilton with the winners' trophy after the Russian Grand Prix
It means that with four races remaining, Hamilton could wrap the title up at the next race in the United States should he leave the Circuit of the Americas track in Texas with a buffer of 75 points or more. That means that Rosberg could well be out of the title hunt come the chequered flag should he fail to finish ahead of Hamilton, while a retirement for Vettel would give the Briton his third world championship to equal another great in the form of his childhood hero Ayrton Senna.