October 11, 2015
Nigeria’s most capped footballer, Vincent Enyeama, on Saturday, apologised to Nigerians for the controversy surrounding his exit from the Super Eagles. 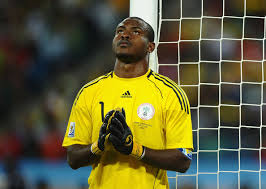 The goalkeeper, on Thursday, following a clash with the coach of the national team, Sunday Oliseh, had announced on Instagram that “I am out of the team. I am no more available for international duties.”
Oliseh on Tuesday had stripped Enyeama of the captaincy of the Super Eagles and handed it to CSKA Moscow forward Ahmed Musa, forcing the Lille keeper to end his international career in controversial circumstances.
The goalkeeper, on the social networking site, alleged insults to his late mother as well as being thrown out of the national camp by hotel security in Verviers, Belgium.
But the coach, while debunking the claims on Friday, expressed sadness over Enyeama’s retirement from the national team, which he said had turned many fans against him, following the team’s 2-0 loss to Congo in a friendly on Thursday night.
Enyeama, on his Instagram account on Saturday, however, expressed sombreness, saying he was “humiliated,” which led him to quit the national team.
“Who would be happy after just burying your mother that carried you nine months in the womb and suffered for you day and night, jumping on a six-hour plane to represent your fatherland only to be stripped of the captainship and humiliated at the first meeting in front of everyone after serving the nation for 13 years?
“I have honoured about 99 per cent of the national team’s invitations, no matter where the match is played. Anyway, my decision to quit the national team is for the best interest of the nation. I don’t want to be the reason that Nigerian football house is divided.
“I want Nigeria to get back up to where it belongs. It’s a professional decision made for the blessing of the nation. I am very sorry for being the reason that all these things are happening. God bless Nigeria,” he said.
Meanwhile, there were indications on Saturday that the Nigerian Football Federation President, Amaju Pinnick, held talks with Enyeama in Brussels, Germany, in a bid to convince the veteran player into changing his mind about his sudden exit from the Super Eagles.
Source:
PUNCH NG.