October 08, 2015
University of Calabar Teaching Hospital, UCTH, has quarantined ten persons following the death of a patient in the hospital on Wednesday with symptoms suspected to be Ebola virus. 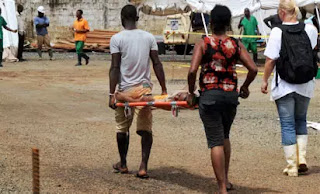 Dr. Queeneth Kalu, Chairman of  Medical Advisory Committee of the hospital who made the revelation on Thursday in Calabar while addressing pressmen  said blood samples have been sent to the Ebola Diagnosing Centre in Benin Edo State.
“On Wednesday, 7th October, 2015, we managed a patient who presented with symptoms mimicking viral hemorrhage (Ebola Virus) and have decided to take the necessary measures”.
Dr. Kalu stated that those quarantined are principally nurses who attended to the patient and those who  came in contact with him before his death.
‘”The following have been informed: National Centre for Disease Control, Federal Ministry of Health,  The Cross River State Government, Calabar Municipality, and the Department of State Security Services, DSS”
She said further information will be provided to the public as soon as the test results of blood samples sent for analysis in received by the hospital.