Virtue of the feast of sacrifice. (Eid al-Adha)

Praise be to Allaah and peace and blessings be upon the Messen-ger of Allaah, Muhammad, and upon his family and companions.
Al-Udhiyah (the offering of a blood sacrifice) is one of the great rituals of Islam, in which we remember the Unity of Allaah, His blessings upon us and the obedience of our father Ibraaheem to his Lord, and in this act of udhiyah there is great benefit and blessing. So the Muslim must pay attention to its great impor-tance. The following is a brief look at this important ritual. 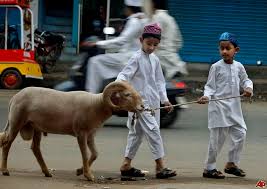 Al-Udhiyah refers to the animal (whether a camel, cow or sheep) that is sacrificed as an act of worship to Allaah, in the country in which the person offering the sacrifice lives, during the period from after the Eid prayer on the Day of Nahr (Eid al-Adhaa) un-til the last of the Days of Tashreeq (the 11th, 12th and 13th day of Dhu’l-Hijjah), with the intention of offering sacrifice. Allaah says (interpretation of the meaning):
“Therefore turn in prayer to your Lord and sacrifice (to Him only).” [al-Kawthar 108:2]
“Say (O Muhammad): ‘Verily, my prayer, my sacrifice, my living and my dying are for Allaah, the Lord of the ‘Aalameen (mankind, jinns and all that exists).” [al-An’aam 6:162]
“And for every nation We have appointed religious ceremonies, that they may mention the Name of Allaah over the beast of cattle that He has given them for food. And your God is One God, so you must submit to Him Alone (in Islam)…” [al-Hajj 22:34]. 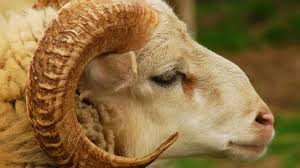 Eid al-Adha (Arabic: عيد الأضحى‎ ʿīd al-aḍḥā,[ʕiːd ælˈʔɑdˤħæ], "Festival of the Sacrifice"), also called the Feast of Sacrifice or Bakr-Eid, is the second of two religious holidayscelebrated by Muslims worldwide each year. It honors the willingness of Abraham(Ibrahim) to sacrifice his son, as an act of submission to God's command, before God then intervened, through his angel Jibra'il and informs him that his sacrifice has already been accepted. The meat from the sacrificed animal is preferred to be divided into three parts. The family retains one third of the share; another third is given to relatives, friends and neighbors; and the remaining third is given to the poor and needy.
In the lunar-based Islamic calendar, Eid al-Adha falls on the 10th day of Dhu al-Hijjahand lasts for four days. In the international(Gregorian) calendar, the dates vary from year to year, drifting approximately 11 days earlier each year.
Eid al-Adha is the latter of the two Eid holidays, the former being Eid al-Fitr. The basis for the observance comes from the 196th ayah (verse) of Al-Baqara, the secondsura of the Quran. The word "Eid" appears once in Al-Ma'ida, the fifth sura of the Quran, with the meaning "solemn festival". 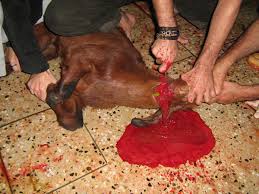 Like Eid al-Fitr, Eid al-Adha begins with aSunnah prayer of two rakats followed by a sermon (khutbah). Eid al-Adha celebrations start after the descent of the Hujjaj, the pilgrims performing the Hajj, from Mount Arafat, a hill east of Mecca. Eid sacrifice may take place until sunset on the 13th day of Dhu al-Hijjah. The days of Eid have been singled out in the Hadith as "days of remembrance". The takbir (days) of Tashriq are from the Fajr prayer of the 9th of Dhu al-Hijjah up to the Asr prayer of the 13th of Dhu al-Hijjah (5 days and 4 nights). This equals 23 prayers: 5 on the 9th–12th, which equals 20, and 3 on the 13th.
My season greetings to you all as the peace and blessings of ALLAH continue to be upon us all.
Sources;
My brother (Abu Abdul Rahman).
Wikipedia the free encyclopedia.