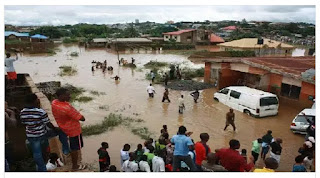 The Governor who was accompanied by his Deputy, Bala Bantex, and other top government functionaries, visited some parts of Tudun Wada, Gonin-Gora, Romi, Sabon Tasha, Kabala West, among others.
El-Rufai described the flood as very devastating and the highest to happen in the state.
He gave the assurance of government’s support to the victims of the flood, saying that those displaced from their homes would be provided with temporary shelter until the floods are over.
He also stressed the need to discourage people from building houses along river banks and floodplain areas, in order to avoid a future ugly incident.
While in Romi, the Governor inspected an abandoned bridge in the area, which he said was responsible for the flooding.
The flood is said to have submerged at least 2,000 houses in the state.