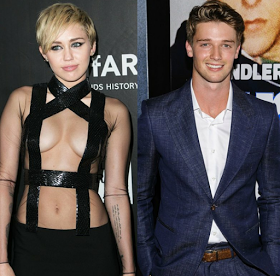 E! News said Monday that after five months of dating, Cyrus, 22, and Schwarzenegger, 21, have chosen to take time off from each other. But a source confirmed to People magazine that the couple have broken up and that the split is amicable.

The split came after photos surfaced last month that showed Patrick and another girl getting really close during his vacation to Cabo San Lucas, Mexico.