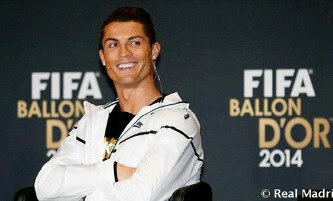 Real Madrid forward Cristiano Ronaldo has won the Ballon d'Or world footballer of the year award for the second year in a row.
The Portugal captain beat Barcelona forward Lionel Messi and Bayern Munich goalkeeper Manuel Neuer to the award.
Wolfsburg and Germany midfielder Nadine Kessler was named women's player of the year, while Colombia's James Rodriguez won goal of the year.
Germany's World Cup winner Joachim Low won men's coach of the year.
Wolfsburg boss Ralf Kellermann was named women's football coach of the year after a successful defence of the Champions League.
The three candidates for the Ballon d'Or were all picked in the team of the year, along with defenders Philipp Lahm, David Luiz, Thiago Silva and Sergio Ramos, midfielders Andres Iniesta, Toni Kroos and Angel Di Maria and forward Arjen Robben.

Cristiano Ronaldo successfully defended his world player of the year status convincingly with 37.66% of all votes, winning for a third time. Barcelona and Argentina counterpart Lionel Messi - who won four years in a row until Ronaldo beat him last year, was second on 15.76%. He was narrowly ahead of Bayern Munich and Germany keeper Manuel Neuer, who had 15.72%.
Ronaldo, who scored 52 goals in 43 games during 2014, looked emotional when collecting the award from former France, Barcelona and Arsenal striker Thierry Henry.
The 29-year-old said: "I would like to thank all of those who voted for me, my president, my coach and Real Madrid. It has been an unforgettable year. To win this trophy at the end of it is something incredibly unique."

Women's World Player of the Year

Wolfsburg and Germany midfielder Nadine Kessler was named women's player of the year. The 26-year-old beat Brazil's Marta and United States international Abby Wambach.
Kessler said: "My heart is beating madly at the moment. I don't think I ever thought in my life I would achieve this moment.
"Without my team-mates and my coach, this would never have been possible. I have a great degree of gratitude that I must give to my family. They have seen me through all the difficult times."

Puskas Award (goal of the year)

Colombia's James Rodriguez, 23, won the Fifa goal of the year award for his World Cup strike against Uruguay, beating Irishwoman Stephanie Roche.
Roche, who scored a stunner for Peamount against Wexford in the Irish top flight, had hoped to be the first female winner of the Puskas Award.
She landed 33% of the public vote to Rodriguez's 42%. Manchester United striker Robin van Persie - the third nominee - earned just 11% for his diving header against Spain in the World Cup.