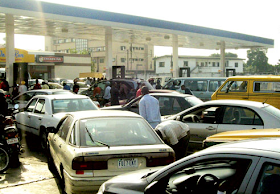 It appears another episode of petroleum scarcity is about to hit Nigerians as members of the Petroleum and Natural Gas Senior Staff Association [PENGASSAN] and their counterparts in the National Union of Petroleum and Natural Gas Workers [NUPENG], are set to begin a nationwide strike starting from tomorrow Monday December 15th.
According to Premium Times, the oil workers are heading for a strike action due to unresolved labor issues with the federal government, underfunding of the Petroleum Training Institute in Delta state as well as the yet to be passed Petroleum Industry Bill PIB.

"We (the oil workers) have sufficient reasons, based on information available to us, to believe that the law makers are not prepared to pass the law, even as the state of the country’s petroleum industry has continued to deteriorate as a result of the absence of a regulatory and legal framework for the industry,” an official of the petroleum workers body said.

The oil workers are said to also be aggrieved over the decision of the management of Total Nigeria to sack the PENGASSAN zonal Secretary in Port Harcourt as well as the lack of promotion for workers of the Petroleum Trust Development Fund (PTDF).